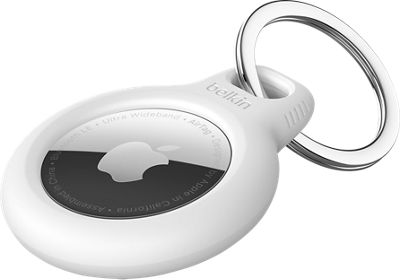 [This review was collected as part of a promotion.] Item arrived yesterday and I am impressed by how small and lightweight it is. It holds my airtag securely and so light that I barely notice its additional weight in my keychain. It also makes me not forget my airtag since it will always be with me.

[This review was collected as part of a promotion.] What another great product from Belkin. This air tag holder is very sturdy has a beautiful design and will keep your airtag in place I would definitely recommend purchasing for all of your luggage is when you are traveling or for your day-to-day commute.

I purchased this along with an AirTag at the Apple Store because I wanted something as small as possible. The size is excellent and the design is flawless. The keyring comes with a diagram and the side of the keyring even has markings that explicitly shows how to lock it. It works exactly as it indicates and the AirTag is secure inside.

Perfect for my two therapy dogs

I got these to help me if I ever lose one of my therapy dogs. Since one is a Great Dane and the other is a blue nose. They are both chipped but for peace of mind with the air tags

Already bought it, before the release. Looks great

The price tag is good. The quality of it is also good. Thanks, Belkin. Would love to see more stuff like this. Hopefully, I get to be one of the first ones to preorder the airtags

[This review was collected as part of a promotion.] Prior to this I was using a silicone generic AirTag purchased online. You would slip the AirTag in and out of the hole by stretching it. It worked fine but didn't seem the most secure. This Belkin case and key ring seems much more secure. The case is actually two pieces that separate and lock into place over the AirTag. You then secure both sides by slipping the key ring over the hole. This seems like a much more secure solution for my AirTag. The only thing is it's made of plastic. Time will tell how durable it is attached to my keys and rattling around in my pocket.