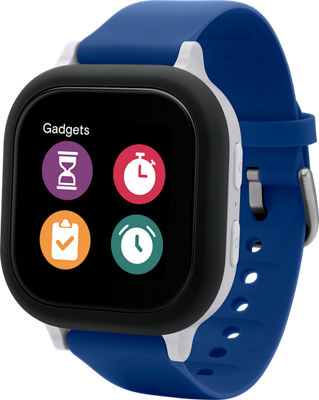 Great watch easy-to-use and piece of mind to know our kids whatever they go.

We bought this to communicate and locate our 13- and 10-year-old kids who ride school buses. The buses are rarely on time and are horrible at communicating; now we can see where our children are, track them in real time, and communicate with them. It has relieved a lot of anxiety for us and the parental controls are great—control it from an app on our phone. Allow texting and calls from 9 pre-approved contacts only, step counter, to-do list, tells us when our children have arrived at predetermined destinations, no Internet. Perfect for us and a decent price for peace of mind. I happily recommend it as a started device for getting kids used to the responsibilities of cellular devices.

Simple but perfect for my kid!!

my son is only 5 and he does carpool with his classmate. It does it job. I can track him to make sure he gets home. he also calls me. I like that the fact he can only call or receive calls from contacts we choose.

Exactly what we wanted

We got two of these, one for each child. They do just what we wanted. The kids can call and text us and approved contacts through the Gizmo App. Through the app we can use GPS to see where they are. The fact that it all happens through the app means no random person can call or text their watches which makes me feel like these are much safer than a standard phone. There are not a lot of fun games but that works well for us as they wear them to school. So they are not playing with the watch during school. I turn the watches on quiet mode during school hour so they simply work as watches and allow us to see where they kids are. Once school is out the watches turn on so the kids can call or text us if their bus breaks down. This is basically exactly what we wanted.

This is awesome for the kids who don't need phones

I wanted a product to be able to communicate with my 6-year-old after school. In my opinion, it is way too early for her to have a phone. We are full-time working parents and we need to know if she was picked up from school or if there is an emergency and she needs to contact us. The Gizmo is perfect for us because she can call us, text us (I like that you can customize the texts), and she can call her other contacts if we are not available to answer. Feature review: It is easy for her to use and navigate. The watch is really large on her wrist but she's tiny so anything will be big on her. I actually like the fact that there are not any games on it. It will not be a distraction for her. I love that I can set up quiet times for school hours. It will vibrate but will not ring when in Quite Mode. The GPS is crazy accurate. Of course this will depend on your coverage area and signal strength. The GPS is definitely one of my favorite features and gives me peace of mind. I like that you can set up Location Alerts that notify you if your child leaves a certain area. I have not yet tried this feature but it's really cool. I also like that with the app, we are alerted anytime she makes or receives a call. It's also splash-proof which is awesome. I will say the one and only thing that I think is lacking is some sort of screen lock. Since the screen wakes up with any tap or touch, she sometimes makes accidental calls. We have not found a good name to compare it to "Butt Dailing". I do not understand the bad reviews but it seems to be people that are frustrated with their service coverage and taking it out on the watch.

Going against the grain here...We love this watch!

In spite of the many negative reviews, we bought this a few months ago for our 8 year old who has recently begun walking to friends houses on his own in our neighborhood. We did have to buy a different charger for it (we got a stand that he can easily manage on his own instead of the odd-shaped charger that it comes with) as well as a velcro band (the band is universal for smartwatches, so that was simple and cheap), but other than that, it's been a fantastic product! Given the cost of it, I can't complain about having to spend a few extra dollars to customize it (don't we do that with all of our phones anyway?) He is able to let us know he's staying at a friend's house for a bit or that he's bringing a herd of children back to our house. We can call him or text him and figure out where he is based on the GPS tracking. The battery life is 4-5 days with moderate usage (he only wears it when he's on escapades in the neighborhood, not all the time). We have not had any of the problems others are complaining about with inaccurate data, but we are located in a large city, so perhaps signal is a factor. If this kind of use sounds like you and your child, I highly recommend this watch.