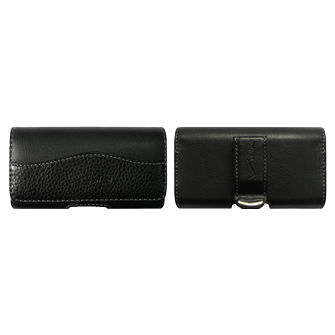 This pouch is well made, functional and nice looking

This pouch is well made, functional and nice looking. The clip that hold it on is your belt is solid

The only problem was it took a couple of weeks to get it.

i bought the horizontal pouch over the last year with the LG Terra. the pouch got snagged and the pooch became disconnected, tore off the clip, and i lost the phone upon exiting my truck. LOST PHONE. fortunately, a good Samaritan found the phone with my id in the pouch and i recovered it several days later with my contacts still in tact otherwise i would have had to buy a new phone and reconstruct my contact list. DO NOT BUY THIS POUCH

Universal is not as universal as it used to be

I have a personal Droid Maxx and a work Droid 4. The previous universal cases I purchased fit both phones perfectly. One of the cases recently got caught and broke the clip off so I needed to get a new one. The picture looked the same as my current case, so I ordered it. When it arrived, I found that it is at lease 1/2 inch less in width and 1/4 inch less in height so it will not work with my phones. Since phones have been getting larger rather than smaller, this shrinking of the "universal" pouch is a mystery to me. I can't use it and it was a waste of my time and money ordering it.