Unlike other drones, this junior flyer can be controlled on the ground as well as in the air. 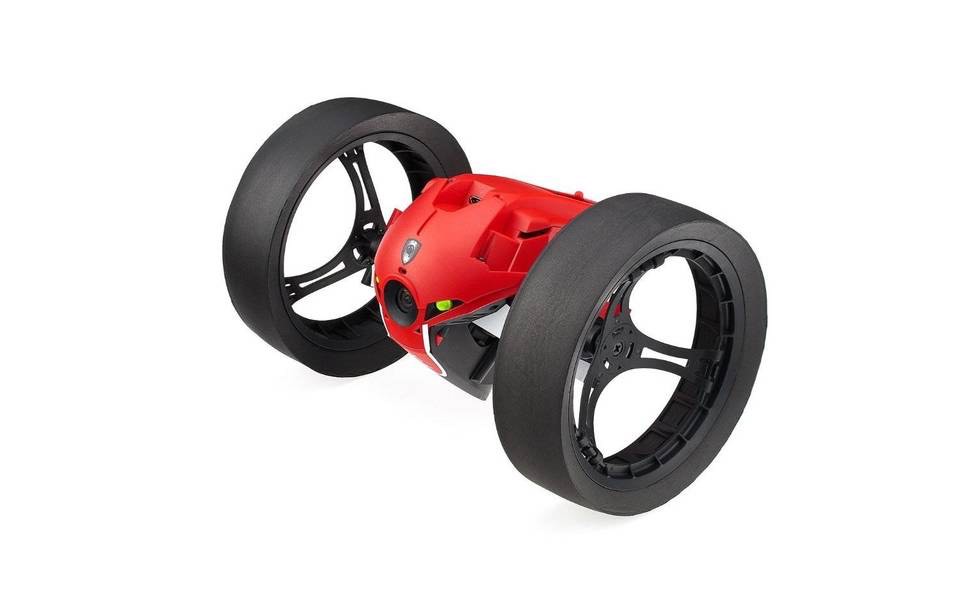 The Parrot MiniDrones Jumping Race Drone may be billed as a kids' toy, but think of it as a high-tech, remote-controlled car. Or even a pet.

Unlike other drones, this device is built to be driven on the ground rather than flown above it. This makes the MiniDrone ideal for kids who aren't quite ready to earn their wings. And while that may appeal to parents, children will be excited to own a drone that can jump 2.4 feet and be raced both indoors and outdoors against other Jumping Race Drones.

Here are 6 key features of the MiniDrones Jumping Race Drone:

1. Smartphone compatibility: Kids can control the MiniDrone via the FreeFlight app, which parents can install on any tablet or smartphone running iOS or Android. And armed with a secure Wi-Fi connection, the drone's motor, wheels and jumping mechanism can be controlled from up to 164 feet away.

“The mobile application that controls the Parrot Jumping MiniDrones is easy to operate and quite responsive,” Ubergizmo.com writes. “It is easy to understand instantly how to jump on and from any obstacles.”

2. Racing wheels: The Jumping Race Drone has a slender, oblong body, supported by two large, retractable wheels that are 6 inches in diameter. Using the FreeFlight app, kids can position the wheels as either “open” or “closed.” The closed setting allows for easier handling in tight spaces, while the open position provides stability when the drone is moving at high speeds. On smooth surfaces in indoor or outdoor settings, the MiniDrones Jumping Race Drone can reach speeds of up to 8 mph.

3. Jumping ability: As PCWorld notes, “You can't call a drone ‘jumping’ and not allow it to jump.” The MiniDrone performs two primary jumps: a high jump and a long jump, both of which can be executed with a tap of the FreeFlight app. The high jump catapults the drone 2.4 feet into the air, and the long jump puts the drone 2.4 feet ahead of its initial position.

The app also houses controls for a handful of acrobatic tricks like the Spin Jump, where the drone spins horizontally while jumping through the air. The large wheels provide stability as the drone lands. "After each jump it'll steady itself automatically, although the manner in which it does so can vary a lot depending on the surface it lands on," PCWorld notes.

4. Photo and video recording: The MiniDrones Jumping Race Drone has a built-in camera for taking photos and video, as well as internal flash memory that can store up to 4 GB of content.

After kids capture images, they can download the finished product to their mobile device using the app, or they can transfer it to a desktop computer using the USB cable that comes with the drone.

5. Two-way radio: The Parrot MiniDrones Jumping Race Drone has a built-in microphone and speaker. This allows kids to communicate with their friends and family similar to the way they would with a walkie-talkie. (A separate headset with microphone is required to use this feature.)

“Finally, dad can pilot his drone into the living room and order his kid around,” writes Mashable.

6. Personality: LEDs and beeping noises give the MiniDrones Jumping Race Drone a lot of personality. After completing a trick, the device will flash and spin based on its “mood.” Models comes in three different colors, each bearing a different name: The red one is Max, the white one Jett and yellow,Tuk-Tuk.

“My kids now treat it like the family dog,” a reviewer on the AmberMac blog writes.