The Parrot AR.Drone 2.0 Elite Edition is for fearless flyers 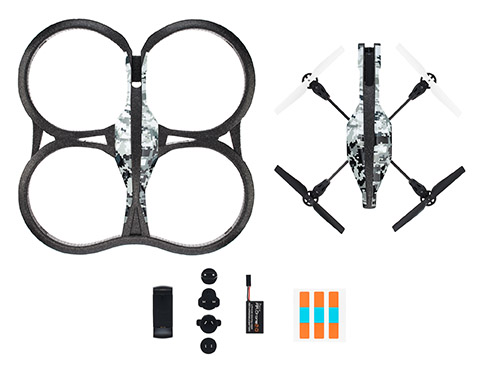 The Parrot AR.Drone 2.0 Elite Edition combines video and photo capability with more complex features for advanced flyers. What truly sets it apart, though, is how intuitive all its features are to control. Virtually anyone can do it — and avoid the professional-grade investment required by other drones with comparable features.

Here are the 4 most notable features of the Parrot AR.Drone 2.0 Elite:

1. Smartphone support: The drone does not need a separate controller to fly, a rare feature in this space. Instead, the AR.Drone 2.0 Elite connects directly to iOS and Android devices through a free app, with the device acting as a controller. In its product review, IGN calls the layout and customization options “intuitive for easy learning and experimentation."

IGN was able to "control flight through combined movements and gestures" using the app's built-in controls. An Absolute Control mode, which translates the physical tilts and rolls of the pilot into flips and barrel rolls, also distinguishes the AR.Drone 2.0 Elite from competitors.

2. Video streaming: The AR.Drone 2.0 Elite is capable of streaming video to a device in HD quality, capturing the entire flight sequence. It sets up its own Wi-Fi network to send video and images to the desired device, while the camera itself provides "a wide field of view, free from fisheye distortion," IGN writes.

The drone also can record to a flash drive, expanding video capabilities beyond just streaming. IGN particularly likes the ability to "review videos immediately," without having to go back and forth to a computer screen to check out footage.

The app also acts as a "heads up" display for the pilot, sharing key drone data. "Flight information like battery life and video recording status are overlaid on top of the live video feed," notes Apple Insider.

3. Navigation and controls: GPS on the drone can show you exactly where it has flown and allows you to pre-plan flight routes. In its product review, Apple Insider also praises the AR.Drone 2.0 Elite for "how easy it was to master flight," calling the in-flight action "responsive and immediate."

An emergency button allows users to "cut power and drop [the drone] from the sky," Apple Insider notes. Other emergency features include a back-up sensor that prevent total battery drain, and a "Rescue" mode - used during IGN's testing - to "perform a sudden jerky motion" to free the drone from a tree or fence.

The AR.Drone 2.0 Elite does need to be registered with the Federal Aviation Administration before flying, but according to IGN, "It's a very simple process that only costs five bucks." (Registration is renewable annually for $5.)

4. Battery life: The AR.Drone 2.0 is available out of the box with a robust battery that IGN calculates will last "twice as long as the average for this class [of drone]." The editors caution, however, that more extreme flying will require more frequent charging, or backup batteries.

All these features help the Parrot AR 2.0 Elite combine basic and advanced functionality into one device. As Digital Trends sums up, "Despite the scary 'drone' name, the AR.Drone 2.0 is, simply, a toy — a really, really fun toy."