See how Samsung’s sleek and sexy new smartphones—the Galaxy S® 6 and S® 6 edge—differ from the Galaxy S 5 and S 4.

If you have the Samsung Galaxy S® 5 or the older Galaxy S® 4, you might be wondering about trading it in for something new. And with Samsung’s Galaxy S® 6 and Galaxy S® 6 edge on sale, now might be the time. These smartphones raise the bar when it comes to everything from size, speed, design and features. So how exactly do these new phones stack up against their predecessors? Here’s a closer look: 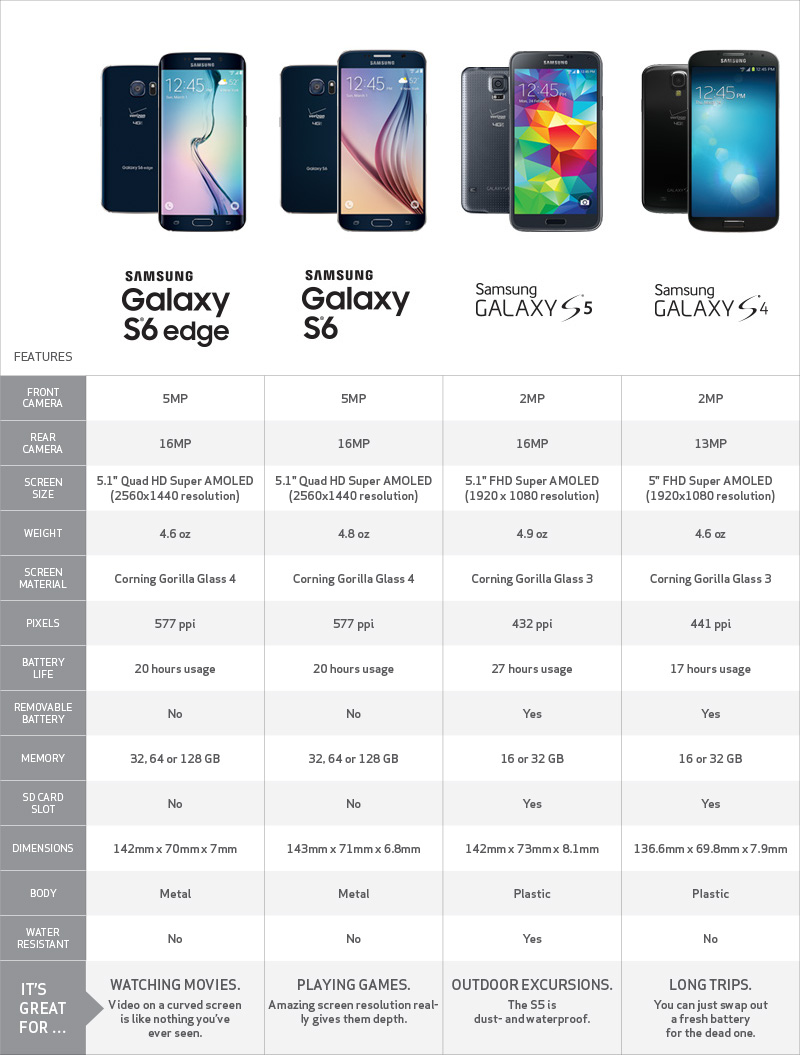 The first thing you'll notice with either phone is how they feel. While the Galaxy S 4 and S 5 sported plastic materials, both of the new Galaxy S 6 phones are made of metal and glass, which makes them fit more comfortably in your hand. Impressive, considering the S 6 phones weigh less than the S 5. They're slimmer, too, so they fit in your pocket and it's easy to text with one hand (not something you can say about many smartphones with 5.1-inch screens).

The S 6 edge has an eye-catching dual-edge curved display. One of its coolest capabilities is Night Clock, which displays the time and an alarm on the edge when the phone is asleep, transforming the entire phone into a sleek alarm clock. All in all, the revolutionary design's premium look is bound to turn some heads and start conversations when it's in your hands.

The Galaxy S 6 edge’s display is already unlike any phone before it, but its quality is equally groundbreaking. Both S 6 phones have a 5.1-inch screen (same size as the S 5), but the new models have more pixels—577 ppi—up from the S 5’s 432 and the S 4’s 441. For viewers, this is akin to getting a new pair of glasses with an updated prescription. You’ll notice finer detail in the games you play, movies you watch and pictures you take: clearer sniper shots in Call of Duty; a tiny blemish on an actor’s face; the subtle shades of red in someone’s hair. Even better, both the S 6 and S 6 edge have brighter screens than the S 5 and S 4. This makes it much easier to read your screen while outside or in bright conditions.

The S 6 and S 6 edge are noticeably and substantially faster than the S 5 and S 4, thanks to a powerful new octa-core, 64-bit processor—one of the fastest on the market, according to some benchmark tests. This should help remove the time you waste mindlessly staring at your smartphone screen while, say, going from your email to Google Drive™. Speaking of which, that highly detailed but large (1.2 GB) processor-hogging game will perform better, too. You’ll get none of the lag while playing massive action titles that you may have experienced on other phones.

If you have the Samsung Galaxy S® 5 or the older Galaxy S® 4, you might be wondering about trading it in for something new. And with Samsung’s Galaxy S® 6 and Galaxy S® 6 edge on sale, now might be the time. These smartphones raise the bar when it comes to everything from size, speed, design and features. So how exactly do these new phones stack up against their predecessors? Here’s a closer look:Sluggish shutter response and grainy no-flash images are the bane of many a smartphone’s existence, but the Galaxy S 6 and Galaxy S 6 edge address these shortcomings with their faster processor and a new wider f/1.9 lens that gathers more light. The improved optics give your images clarity and color in dark situations, so that photo you took of your cousin’s wedding reception doesn’t look like she’s wearing a pile of old sheets. You also don’t have to worry about missing the big moment when the bride and groom kiss, thanks to a new Quick Launch feature: Just double click the Home button to instantly open the camera from any screen, even when the phone is asleep.

Power management essentials create peace of mind for users so there is no need to worry about battery life. With built-in wireless charging, users can quickly and conveniently charge their phone on almost any wireless charging platform (charging pad sold separately). Fast Charging gives users up to four hours of battery life with a 10-minute charge and a 50 percent charge in about half an hour, and Ultra Power Saving Mode affords users up to 24 hours of talk and text time when the battery is at 10 percent.