Samsung's Galaxy S9 puts the focus squarely on the camera – and that camera looks like a winner.

Samsung’s Galaxy S9 is an update that mostly sticks to the look and feel of the previous generation device, which is probably a big reason why the company is focusing specifically on the flagship smartphone’s camera for this reveal. The Galaxy S8 and S8+ already had one of the better smartphone cameras in the industry, and the Galaxy S9 and S9+ both seem to be top contenders to secure Samsung a place among the best options out there in 2018, too. But the most interesting thing about the camera might just be how central it is to the S9 and its launch.

A home away from home(screen)

Samsung is fully aware that people spend a lot of time in the camera app, and it wants to provide users with even fewer reasons to ever leave. A Samsung rep actually described it as a kind of destination unto itself during an advance briefing about the S9, and you can tell based on the features packed into the app, as well as the attention paid to redesign its interface to make it more user-friendly.

On the UX side, you no longer have to dig through a submenu to find all the various shooting modes available - they're listed at the top in a tappable header, and you can also just swipe left and right to quickly cycle through the various options. It's a smart and easy fix to what was one of the most lamentable aspects of the S8's camera experience.

Everything can also be easily shared to various social apps and with friends via messaging, etc. from within the camera app, meaning it’s kind of a hub for your personal broadcasting experience. And it’s a home for shopping and information gathering, too, thanks to Bixby intelligence features that use image recognition to serve up direct shopping links, or to translate signage on the fly.

Samsung's smartphone is still equipped with a traditional home screen, of course (it's not like it boots right into the camera) but you can almost see that they may have toyed with that very idea, before landing on this hub model. It still feels like Samsung's just a breath away from borrowing Snap's famous phrase to describe itself: 'We're a camera company' - of course, Samsung actually used to make dedicated cameras, so it's not too much of a stretch.

Samsung's behaving like a camera company when it comes to the actual photographic optics of the S9, too. The basic camera in both the S9 and S9+ gets a variable mechanical aperture, for instance, going from F1.5 in low light to F2.4 in brighter conditions. This is huge not only for helping to reduce noise in dimmer spots, but also when it comes to the camera's 'Pro' shooting mode, since you can manually set the aperture to whichever of the two you desire. That's great for when you're specifically trying to add depth to your image via real bokeh, for instance, or when you want a flatter depth of field for portraits.

It's also going to lead to better results in almost all situations for automatic shooters, and I found that was definitely the case during my limited hands-on time. Plus, watching an aperture actually close down and expand on a smartphone camera when you adjust the settings is just pretty darn cool.

Finally, Samsung has also decided to go the way of Apple and other rivals and put more camera into the larger S9+. That means you get a dedicated physical 2x optical zoom thanks to the second lens, which has a longer focal length. That additional lens doesn’t have the variable aperture feature, however, so it’s not going to be able to let in as much light in darker shooting situations. Still, it’s great to have and a big bonus for anyone hoping to leave their compact zoom camera at home while traveling.

In terms of straight specs, the Galaxy S9 and S9+ both have 12 megapixel rear cameras, and an 8 megapixel front-facing shooter, and the S9+ also has that 2x tele lens which is also powered by a 12 megapixel sensor. It's funny, I barely even thought to ask about this - megapixels basically don't mean anything anymore given the state of modern devices.

Samsung has also tweaked its dual sensor capture to help make the most of low light capture. The new system catches sixteen different exposures of a single scene to compare for noise and cancel out more of those tell-tale specks and digital fuzz you get when using a small sensor in poor lighting. The result is a smoother, brighter image with less of what we'd call 'destructive' digital enhancement - or obscuring/destroying actual detail in the scene because the noise reduction algorithm is mistaking it for more sensor static.

Samsung demonstrated a lot of their own samples that showed this working to great effect, but it was difficult to test in the conditions of the pre-brief area. This is something that will require extensive night-time and low light environment testing to test in full, but early results (visible below) show plenty of detail retained and bright scenes.

Suffice to say, Samsung knows that lowlight shooting, without using flash, is something people really want to do with their phones, and they’ve spent a lot of effort on making sure that generates the best results possible. Based on what we’ve seen, it looks like they’re definitely moving the needle in a positive direction for this clutch mobile photography metric.

So Samsung is doing some very smart, very good things with its camera. It's also doing… some other stuff. Like its animated emoji take, which is clearly a response to Apple's Animoji. The issue is that even in controlled demos where you'd imagine Samsung would be doing everything possible to make these look good, they look… not good.

You can see my horrific visage in the examples provided, but even when Samsung reps were demoing this the effect was very much ‘uncanny valley’ rather than fun, friendly feature. Whatever else you may think about Bitmoji or Animoji, they’re not terrifying to look at, whereas the Samsung variety never escaped being unnerving first and foremost, and perhaps slightly whimsical afterwards. You mileage may very, and they do look like me, but they strike me as unnerving in a way similar offerings from other companies do not.

You generate your own animated avatar by taking a still photo (during which you're advised not to smile) and Samsung allows you to use these to express emotions with a preset animated emoji set, and also to map them to your real face for catching photos and stuff like karaoke clips. But if anything, these are even more disturbing in motion.

It's understandable to try to capture some of the fun of the current self-styled emoji craze, and Samsung is good at the camera part of this, but the end result feels half-baked and best avoided. Luckily, it's easy enough to do just that.

Bixby gets smarter – but not yet smart

Samsung’s Bixby assistant is back again on the S9 and S9+, and it’s found a home within the camera app, too. Bixby has the ability to identify products and offer up shopping links, for instance, like working with a new makeup virtual try-on mode to provide Sephora  shopping. This is impressive and the makeup mapping works well, based on the limited demo. and Samsung also showed off its ability to do things like identify bikes and provide the correct shopping link.

This is pretty cool, though I think the appeal of having commerce directly in you camera app is limited (and potentially overly obtrusive). Samsung's also using Bixby to do live translation of signage, however, and the company showed this off using real signage they brought into their demo space to prove it.

The weird thing is, this just revealed how far they have yet to go. The signs (again, Samsung selected) featured phrases including the Spanish equivalent of "Vehicle speed monitored electronically" but managed to butcher it into a literal, line-by-line translation with jumbled meaning, saying something along the lines of "Speed electronic maintained." Likewise for sample restaurant menus and other examples they showed.

It became clear that Bixby’s translation prowess was limited to just literal, direct word translation – there seemed to be no attempt at conveying meaning, as you might find with Google  Translate for instance. It was a weird choice to highlight Bixby’s supposed improvements, and left me with no really high hopes that Samsung’s virtual assistant has become any more of a value-add feature: It’s probably best avoided with the S9 and S9+ just like it was with the S8 generation.

The Slowest of Mos

Back to things Samsung's Galaxy S9 does well - there's a new slow-motion mode that can capture up to 960 frames per second for 0.2 seconds. That sounds like a short amount of time, but it translates into 6 seconds of footage played back at normal speed, and it's fantastically fun.

The super slow mo mode (which, to be fair, Sony  had on its XZ Premium last year) is made especially great because it can work automatically with a defined motion detection box. You can set the size and position of the box yourself, so that you’re framed up for exactly where the action is going to be, and then it’ll grab whatever happens in that area and slow it down to a mind-blowing degree.

This mode is also available manually if you think you're better than software at finding the moment, or if you're just slowing down some continual action, like rapids or rainfall. Captured clips can be easily shared as GIFs anywhere you'd want to, and you can even immediately save it as a motion wallpaper, which is really quite great.

Samsung's Galaxy S9 and S9+ are billed as "The camera reimagined" and though that includes your standard amount of marketing hyperbole, they really have pushed the camera forward. That's great because the S8 camera remains one of the better options available on the market currently, so this improvement is building on top of an already stellar reputation, with tweaks that should make a big difference in terms of the types of photos and clips you can capture.

Check out our general photo samples below, taken with the Galaxy S9+ (unedited out of the camera), along with a video showing how stabilization works when capturing movies and walking at a normal pace indoors. 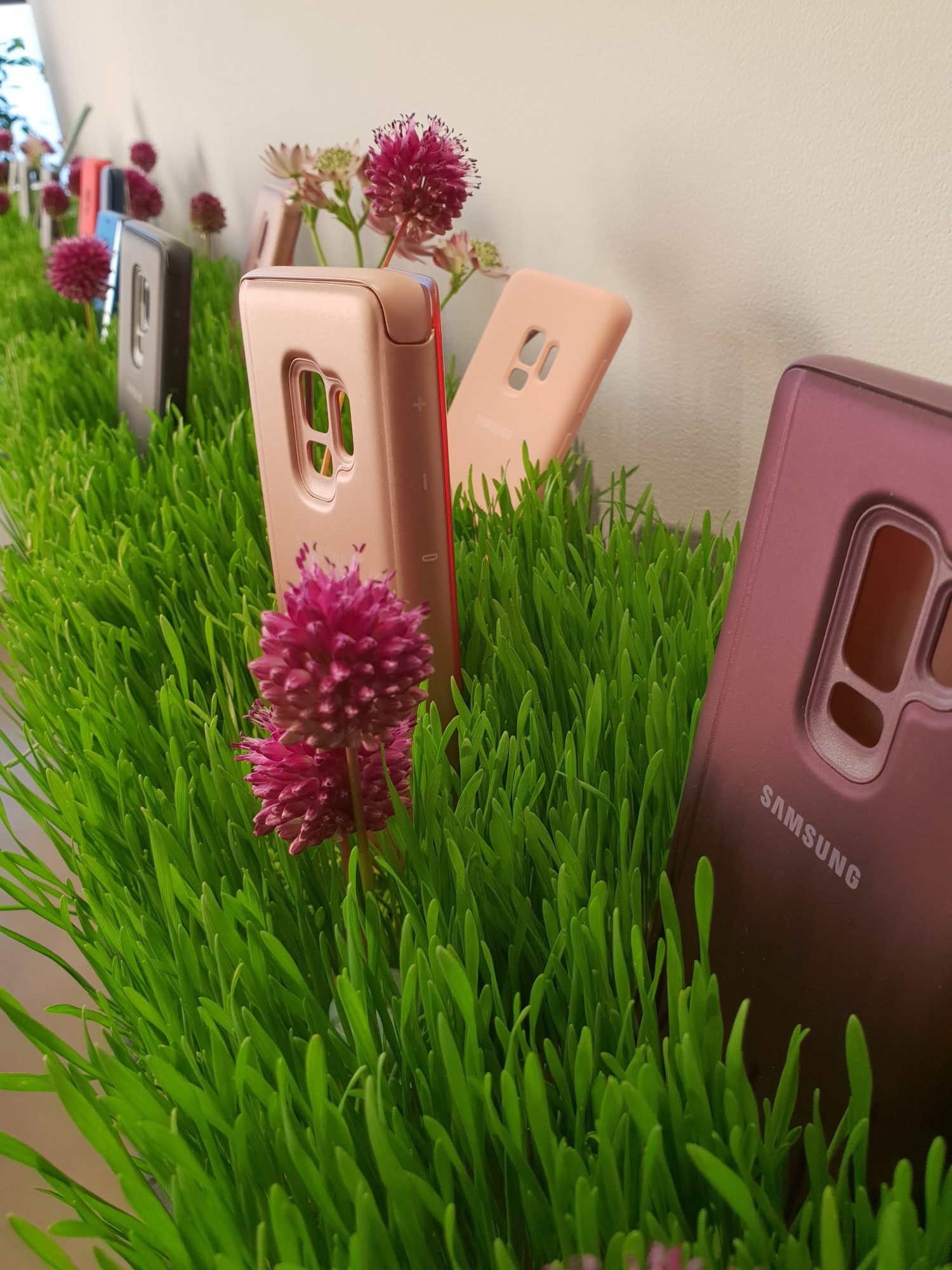 Samsung’s Galaxy S9 and S9+ will be available for pre-order in the U.S. and Canada from February 25, and available in stores on March 16. For more info, check out our post detailing all the new goodness for Samsung’s 2018 flagship here.

This article was written by Darrell Etherington and originally appeared on TechCrunch. To view the article in its entirety, read on at TechCrunch.